To check a remote computer for open/closed TCP ports using PowerShell version 2 (and up), you can use the Net.Sockets.TcpClient class from the .NET libraries. There's an example below. I also wrote a decent, generic script module for this that you can view examples of how to use - and download - below.

You are free to review the examples below, or to use this script module, but this PowerShell nmap-like script module (PSnmap) that I wrote years later beats this script module hands down in just about every imaginable way (except for how well it's documented). It's orders of magnitude faster, uses less resources, and is overall a more polished product. Subnets can also be specified using CIDR notation in that new script.

With PowerShell version 5 came "Test-Port" as well, for single ports (but it is inferior in some ways to PSnmap):

I wrote a module called Get-PortState which produces custom PowerShell objects that can be assigned to a variable, sent to Format-Table for console display, exported to CSV, or whatever you might want to do with them. However, for the sake of convenience, there's an -ExportToCsv parameter that allows you to specify a CSV output file name directly when you run the Get-PortState command. You also have the data/objects from the last Get-PortState run available with the command Get-PortStateLast and can pass that to Export-Csv (or ConvertTo-Csv and Set-Content).

One thing I noticed in my lab environment, is that the timeout for closed and filtered ports against some computers seems to be pretty long. Due to this, I added an -AsJob parameter and a -Timeout parameter (default of 3000 ms / 3 seconds if omitted; only in use together with -AsJob). This will speed up processing in many scenarios, but at the expense of using more resources as it spawns a powershell.exe process for each port connection attempt.

Just as I was about to release the module, I thought it'd be nice to have a DNS lookup feature, and tried to implement this sanely and flexibly. If you pass in an IP that resolves to a host name, you will get the host name; if you pass in a host name that resolves to one or more IP addresses, you will get the IP address(es) - joined together with semicolons if there are more than one.

If you can't install modules (even for your user only), I made sure you can dot-source the script, as demonstrated in the below screenshot example.

The old script I initially put up is still available at the bottom of this article, in case someone wants it, but I do recommend getting the new one. The old one only works against a single target host and is mostly a telnet replacement for checking for open ports a bit more gracefully, as I mention there. The newer script does that, and more, and is more consistent with recommended PowerShell cmdlet design (but not 100%).

Let's start with a simple code example in case you want to roll your own:

To just check for an open port on a single host, you can use something like the code below. This also has the added bonus of using an asynchronous call with a specified timeout in milliseconds ("3000" here).

To emulate "netstat" and show locally listening ports, established connections, and remote ports that one single, local server is connected to, you can use this code:

*Get-PortState.zip - Download, remember to unblock, and unzip to a PowerShell modules folder. See the variable $env:PSModulePath. Or rename the .psm1 file to .ps1 and dot-source it. You can also run Import-Module against a (relative) arbitrary path containing the module.

But you probably do want PSnmap instead. It's so much better, and so much faster. Just have a look at that screenshot example. 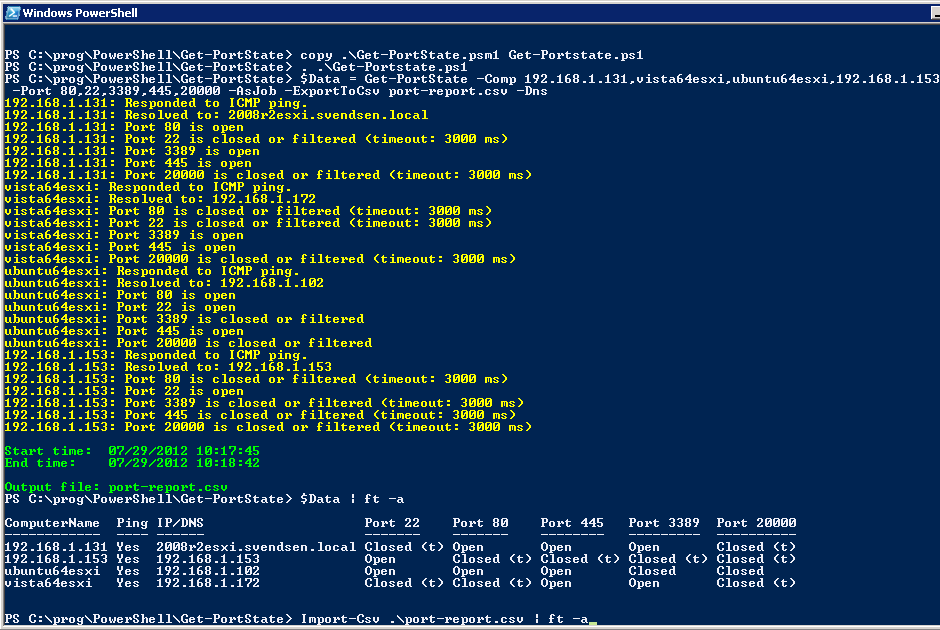 However, if you use it as a module and import it with the Import-Module command, the variables will be correctly scoped to the module, and you won't have this issue.

Here is a simple example that just gets two open ports from one target, without using jobs. When ports are open, it usually goes fast. As you can see in the summary, it finishes in less than a second. However, if you do not use the -AsJob parameter, you can experience "hangs" of 20-30 seconds when ports are closed or filtered on some target hosts.

To also suppress the summary, use the -NoSummary parameter along with -Quiet. Here I also pipe to Format-Table -Autosize (ft -a) for a neater display of the information.

So you might find yourself forgetting to assign the results to a variable, and also forgetting to use the -ExportToCsv parameter. With this in mind, I implemented a Get-PortStateLast command that'll give you the custom PowerShell objects from the last Get-PortState command run (unless you've dot-sourced the script and have later changed the $Data variable).

Here I get the IPv6 and IPv4 addresses for a Windows server connected to from a Windows 7 client, as well as whether the default RDP port is available:

Using Get-PortState From Another Script

I don't know how likely it is, but in case someone wants to use the Get-PortState command from another script, or for other purposes than making a report, I should briefly address how you would use the script/module in this regard.

Something like this is the least you can get away with:

Initially I wrote a simpler version of the script that's now featured on this page. I'm keeping it along with the original description for the time being:

This PowerShell script checks for open ports, or an open port, using the .NET class Net.Sockets.TcpClient. Why didn't I think of this sooner? Essentially it's a replacement for using telnet for checking for open ports. I use this script now, rather than having to start a separate cmd window for each port to test with telnet, and then having the useless cursor in the top left corner, and usually having to close the window or wait for a timeout, if the port is open.