In this article I describe how to embed PowerShell code in a (not so standalone after all) batch/cmd.exe file. It allows for it to run seamlessly.

To embed PowerShell code in a cmd file in the way I'm going to describe in this article comes with two known disadvantages, which are as follows:

It works on my Vista computer with PSv2. Primary testing and "development" has been done on Windows 8.1 with PowerShell version 4.

This might serve as a crude alternative to PS2EXE found on Technet.

As always, I'm posting in case it's useful for someone. One scenario might be wanting a double-clickable shortcut (but you could then just call powershell.exe from a batch script "manually"). The technique I describe here is just some logic that copies to a temp .ps1 file and runs it, with some voodoo to avoid running the batch code that's in the same file. 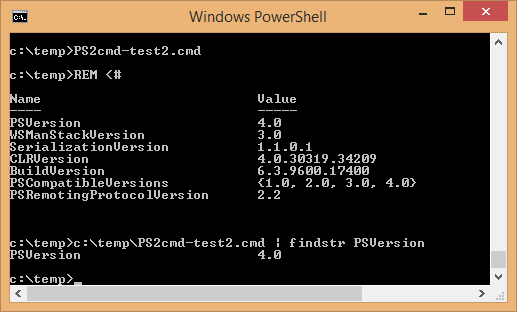 An example file that just dumps the $PSVersionTable will look like this:

You need to store this code in a file with the .cmd extension, and cmd.exe is the most happy with ASCII-encoded files. I recommend using PowerShell ISE or another capable PowerShell editor to create the PowerShell code, and then paste it into the ASCII/ANSI-encoded .cmd file in the right place (at the bottom).

Converting to ASCII for the batch file

A one-liner to convert a file to ASCII encoding is:     Powershell     Windows     Batch     Programming    All Categories