You might find yourself wanting a report of when servers or workstations in a certain OU, or the entire Active Directory, were last patched. Here you will find a script using WSUS and one querying online servers or workstations with COM. Both remote COM and local COM via PowerShell remoting are supported, and there's an asynchronous version using PowerShell runspaces.

I should also mention the WMI class Win32_QuickFixEngineering, but I experienced various bugs with it, so I decided on these other approaches.

See this article for how to get computer names from an OU in AD or the entire AD. Here's a one-liner for getting the number of waiting updates given some logic in the filter that seems reasonable:

I'll throw in my 5 cents about Win32_QuickFixEngineering right now:

My first (and so far last) attempt with Win32_QuickFixEngineering looked like this:

There, "$servers" is an array of strings containing server names; you can use "gc servers.txt" or Get-QADComputer, Get-ADComputer or similar in its place, of course. You might want to silence or redirect errors if running it against servers where WMI might fail. To silence, you can use -ErrorAction SilentlyContinue, but then you won't see the ones that fail. If you use "-ErrorVariable WmiErr" (remember not to use a "$" there), the errors will be captured in the variable $WmiErr and with PSv3 and up it now contains a "PSComputerName" property that identifies the computers it fails on. You can write something more elaborate, use try/catch, etc., but I personally won't bother since it's not useful to me right now.

Anyway, the results I got were all wrong. The dates were incorrect compared to what my COM script reported, which I knew to be correct. Four out of 24 test servers reported correct dates; all the others had the wrong date. Some had dates going years back, some a few months back. Maybe I'm doing something wrong, but it doesn't seem too obvious at first glance. This is a mixed environment with Server 2003 R2, 2008 and 2008 R2. Errors cannot consistently be tied to one specific of the OSs mentioned.

This script finds the ArrivalDate of the last update which has been reported as installed to the WSUS server you're querying. There appears to be no property to retrieve the date when it was actually installed - from WSUS - only when it arrived, combined with the fact that it indeed is installed. Together they serve as a decent indicator in most cases, I would think. I'm not entirely satisfied with this solution, but it will have to do for now.

I might have overlooked some approach, but I couldn't find a property anywhere in the WSUS objects for when it was actually installed, so I ended up writing this based on the arrival date and the fact that it is installed. I have verified that the date for arrival and installation indeed can be different for the last update.

Another thing to consider is that you will not receive data about computers that have never reported a single update as installed. WSUS seems sort of clunky to deal with. It's also a major flaw that you can't get reports of which computers are missing a certain update from the GUI utility. Maybe a bunch of wrapper functions / cmdlets would be a good idea. I didn't find too much WSUS stuff at the Microsoft script center the last time I looked.

The Data Looking Pretty in Excel

Here's a screenshot of some data from a test environment imported in Excel. The data is sorted on arrival date with the oldest first, then on computer/host name if the date is the same. 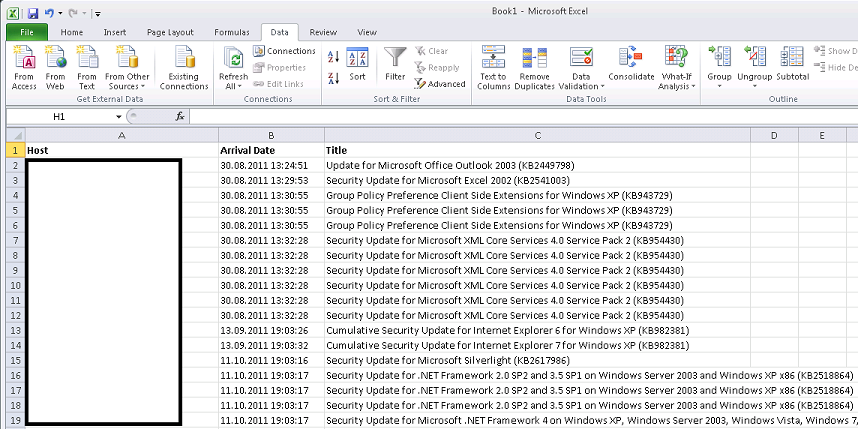 This script will only work from an elevated PowerShell console/host as it requires administrative privileges.

*Get-Last-Update-WSUS.ps1.txt - right-click, save as and rename to .ps1.

The script supports both remote COM (default) and local COM via PowerShell remoting. There is an asynchronous version as well as a "regular", serial one. It produces both HTML and CSV reports. The CSV reports can easily be imported in Excel. It will overwrite existing report files without prompting. See this article for how to get computer names from an OU in AD or the entire AD.

Remote COM can be tricky to make work through a firewall. Among other things, you need the "Windows Firewall Remote Administration Exception" - which is set via a GPO or with gpedit.msc - and RPC. I searched the web for a while and found various information, but something has happened in the lab so I am currently unable to make it work there although I got the SCOM agent push to work. If I disable the Windows firewall, it starts working immediately.

The error I'm seeing with remote COM is:

It starts working immediately when I disable the firewall. PowerShell remoting, however, works in the lab.

Here are some reports from a test environment. Dates are sorted in descending order, unlike the WSUS script. I guess I couldn't decide what's more useful, so it's inconsistent. Add the -PSRemoting flag to use PowerShell remoting and local COM via the PS remoting. The default is remote COM. 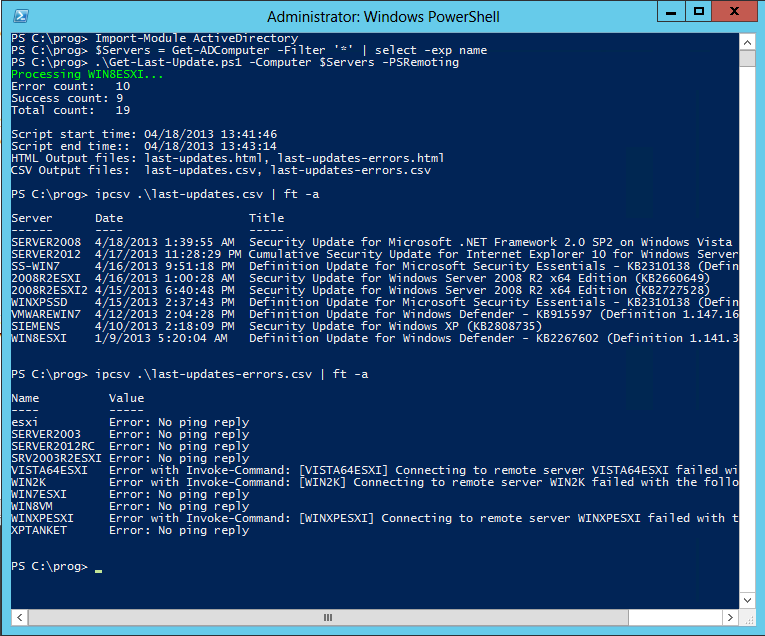 ''2013-09-03: Uploaded an asynchronous version using PowerShell runspaces for concurrency. You can expect about 1-2 minutes processing time per 100 servers, depending on hardware, phase of the moon, etc. It has a -NumJobs parameter that's set to 5 by default. About 10 or 20 jobs seem to be good numbers also. It's a lot faster than the completely serial version''

''2013-01-20: Important bug fixes. Some errors were incorrectly reported as successful, and rendered the date sorting useless. This should be fixed. Should only have been in effect with the -PSRemoting parameter'' 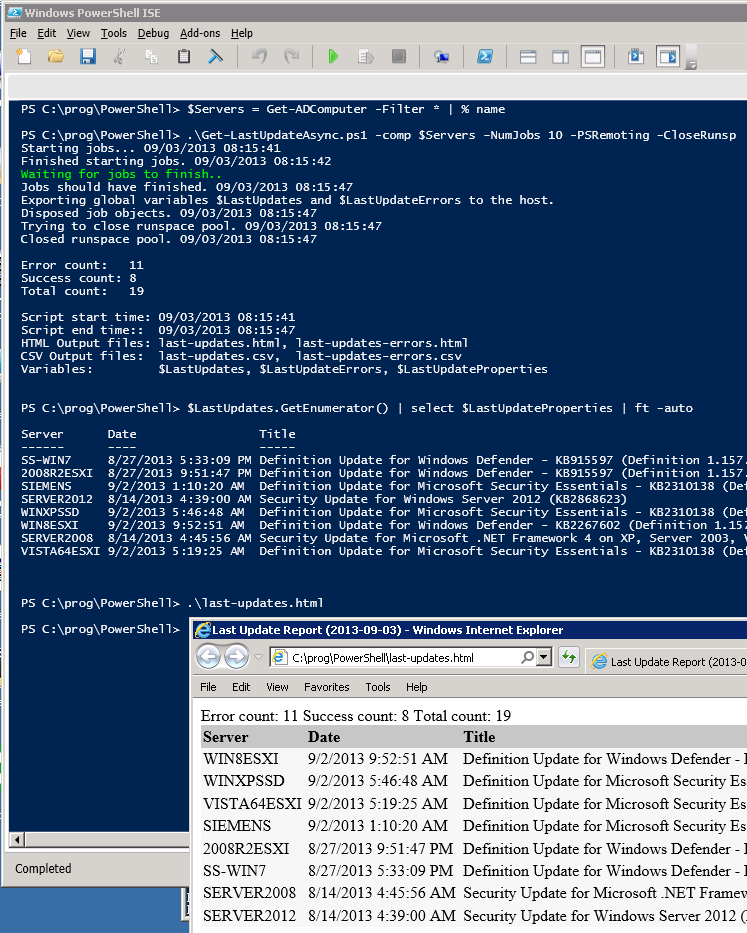