Check if an AD user exists with Get-ADUser - Svendsen Tech

In this article, I describe how to check if an Active Directory user exists or not with the PowerShell cmdlet Get-ADUser, and show how to handle the quirks, such as the one that -ErrorAction Stop does not work, nor does setting $ErrorActionPreference = 'Stop', and using try {} catch {}.

The AD cmdlets are inconsistent with PowerShell standards in some ways. Missing -WhatIf support on critical cmdlets, "-Properties" instead of "-Property" (you're supposed to use the singular form; this is seen on other parameters as well here and there) , -ErrorAction doesn't behave as many expect, and possibly things I don't know about, to mention a few.

I revisited this problem now on 2017-03-12 and, to my surprise, now the try/catch block works on 2012 R2 on a fresh install against a Server 2016 AD controller. The screenshot below, showing the failures, is from 2012 R2, but against a 2016 AD in the new lab, still on 2012 R2 (fresh install), it works. I'm not sure if the AD cmdlets have somehow been updated (I didn't think that was possible, but can it happen via Windows Update now??) or if it's because the AD controller itself is Server 2016.

This demonstrates that -ErrorAction SilentlyContinue doesn't seem to work with Get-ADUser -Identity when a user doesn't exist.

It also demonstrates one of the successful verification methods I document more extensively below in this article.

You might find out about "-ErrorAction Stop" and try {} catch {} blocks, and expect something like this to work:

Except it does not print the warning. Setting $ErrorActionPreference = 'Stop' does not work either. This is a bug/flaw with at least this AD cmdlet. I suppose the reason would be that it doesn't fail to execute the query, it just doesn't find the user.

You could force the output to be an array using the @() notation, and check if the .Count property is 0 for non-existence, or greater than 0 for existence (.Count -gt 0 or .Count -eq 1), like this:

You can also simply cast what's returned to a [bool] type; that's a so-called boolean value that can either be true or false (respectively traditionally represented by the numbers 1 and 0).

So you can check in an if statement (I also tossed in a foreach loop) like you see below. Remove the "-not" to invert the logic and check if a user exists.

As I talk about in the beginning of this article, the behavior has changed as of March 2017 with a Windows Server 2016 AD controller. Here's an example of how you can now do it. You don't actually even need the "-ErrorAction Stop" part - it'll work even with -ErrorAction SilentlyContinue now (which is weird?). Trying to document this new behavior now.

Image example of how you can now do it: 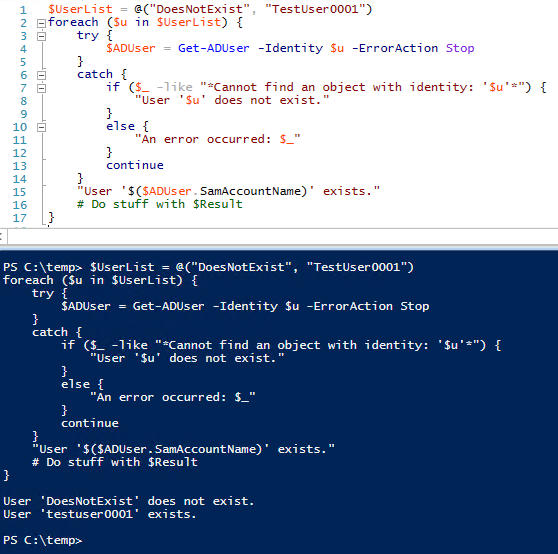 For the sake of the completeness of this article, I'll mention a few things about also using ADSI, which can be used in PowerShell version 1 as well.

I base my example on what I found here and have amended a few things based on the query to target only users that I looked up in my own wiki article here.

First I tried what Richard Mueller mentions, and did this:

The only difference is in the LDAP query, where I added "(objectClass=user)", which targets users, and "(objectCategory=Person)", which filters out "contact" type AD objects that would otherwise be part of the results. You can use other LDAP queries that might be better than what I've been using.