The PowerShell for loop - Svendsen Tech

The PowerShell for loop is similar to the for loop in other programming languages and it's usually used as a counter of some sort for processing items in an array/collection. More commonly used are the foreach loop and the ForEach-Object cmdlet. Click here to read about foreach loops and ForEach-Object.

In PowerShell you normally don't need for loops too often, but they're occasionally necessary - for instance when you need to keep track of an element's position in a collection - although you could always use foreach and a range of numbers to create the counter (''x..y''; e.g.: ''0..9'', for numbers from 0 to 9). Foreach and a range will normally be a lot faster.

Caching the array count will also speed it up significantly if it's repeated a lot. There's more on that here

The PowerShell for Loop's Syntax

The syntax is displayed in the following diagram:

First, the initialization is run, then the condition is evaluated and while it's true, the statements in the specified block will run. After the first run, the increment pipeline is processed/run and the condition is checked again. If it still evaluates to true, the code block runs again, the increment pipeline is run, and this process is repeated until the condition evaluates to a false value. If it never becomes false, you have an infinite loop - unless you use the '''break''' keyword inside, in conjunction with an if statement, or some such.

One place where PowerShell for loops differ from those seen in other languages, is that the initialization, condition and increment parts are actually pipelines. However, output from the pipelines is discarded, so you are left only with the side-effects.

The Typical for Loop Example

Something like this is the canonical example seen in most languages:

However, you can do more in the three pipelines if you so desire. Personally, I don't consider it too useful in most cases.

In a script, you need to spread the for loop out over multiple lines, and indent with four spaces (recommended best practice in PowerShell). When you press the TAB key in PowerShell ISE, it will automatically insert four spaces (or however many are necessary to align with the above code). It'll look similar to the following screenshot. 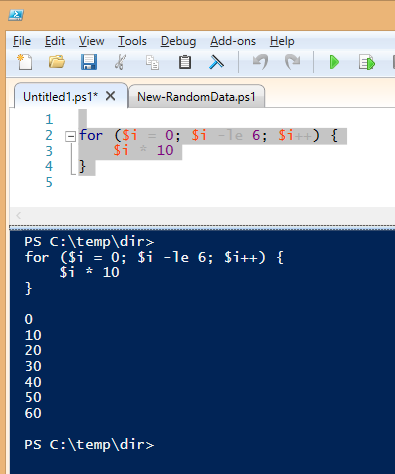 Using The continue And break Keywords

This skips the numbers 3-5 using the continue statement which causes PowerShell to skip the remainder of the loop script block, and start on the next iteration (if you want to learn more about PowerShell regular expressions and the -match operator, click here). The more common approach would be numerical comparisons using the -ge, -gt, -lt or -le operators, or -Contains/-NotContains, but for the sake of this example, it's simply a lot shorter (-Contains will be about the same, when I think about it).

This breaks out of the loop when it hits the number 4 in the if statement.

Using my PowerShell benchmarking module I demonstrate how a simple caching of the array/collection count, rather than checking it once for each iteration, significantly speeds up the overall loop execution time, when you iterate said collection using a traditional for loop.

Doug Finke has a blog post about this caching technique here. I'm seeing even greater speed gains than the "4x" he is getting.

As you can see, the caching is simply an assignment of the array's count to a variable, and then using that variable in the condition part of the loop later, rather than retrieving the .Count property once for each iteration:

How It Compares To A foreach Loop and ForEach-Object

Getting Freaky With It