SSH from PowerShell using the SSH.NET libraryFor various reasons you might want to execute commands via SSH, using PowerShell. Presented here is a module with functions (that work like cmdlets or commands) for running commands via SSH on remote hosts such as Linux or Unix computers, VMware ESX(i) hosts or network equipment such as routers and switches that support SSH. It seems to work very well against OpenSSH-type servers.

The module uses the SSH.NET library which you can find on GitHub (formerly CodePlex). Also see the [downloads section below where I've bundled the DLLs I've tested with.

Starting with the good news about VMware: ESX(i) 4.x seems to be supported.

However, I've found that when I try to connect to VMware ESXi 5.x using this module/library, using a password, I get the error "Unable to connect to 192.168.1.103: Exception calling "Connect" with "0" argument(s): "No suitable authentication method found to complete authentication."". So it appears the authentication method ESXi implements isn't supported by the SSH.NET library, or maybe the other way around... The developers suggest an approach here. I have tested this, but I'm getting an unexpected error related to the event handler.

The code I'm using and error I'm getting is what the poster "Jaykul" describes somewhere near the bottom of this thread.

Using a key will, however, work. See the bottom of the article for more information on that. Given that, I suppose using this module to add keys to hosts running 4.x might be a good idea before upgrading them to 5.x to avoid manual labour (except the keys seem to be cleared on upgrade?).

The majority of this was written in a couple of days and must be considered beta - but as of November 2017 this module has been downloaded over 80,000 times, and I've not heard much about bugs beyond wanting to be able to use key files in the current directory without using a full path (this is now supported in the "SCP add-on version"). I've realized a few design decisions were quite poor, but rewriting seems daunting. This project is now also on GitHub in the PowerShell gallery version (the best one, it supports PScredentials objects, etc.). 2021-10-29: I have not used this module myself in years. This page was moved from MediaWiki to mostly static HTML. There can be formatting bugs and internal link bugs as a result of the reproduction. But the article gets a fair bit of traffic. The module is easily upgraded to a newer SSH.NET library by replacing the DLL (presumably, untested). Now that it's 2021, this module has been downloaded roughly half a million times, so I think some people depend on it... I feel guilty for not maintaining it better. Maybe there are meta blog posts about this blog post that describe how to use the module.

I should also mention that importing private keys created with Putty will not work, as the Putty developer apparently uses a different key format standard than (most of) the rest of the world. The OpenSSH key format is currently supported, but the Putty key format might be supported later if the developers implement it. There's a thread about it in the discussion forums on their CodePlex page. Oh, and PuttyGen.exe can save/export keys in OpenSSH format if you tell it to.

Example of version 2.x of the module, with objects returned rather than strings, and an "Error" property with a boolean (true/false) value. Standardized to use Write-Verbose, Write-Warning and Write-Error. 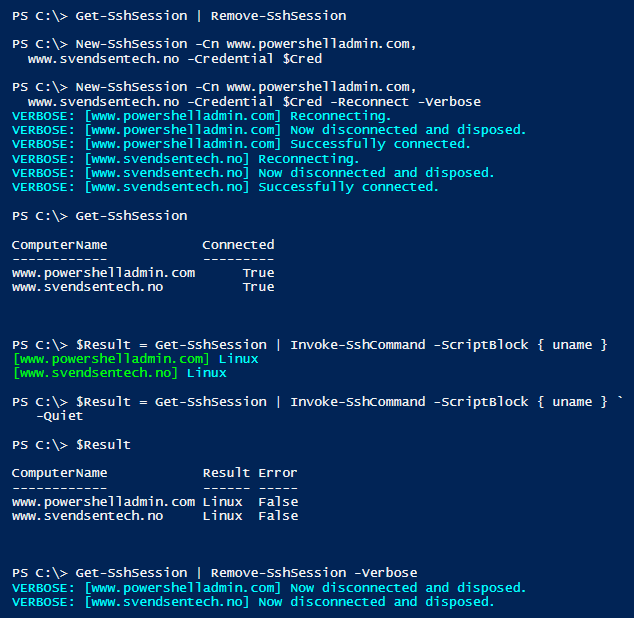 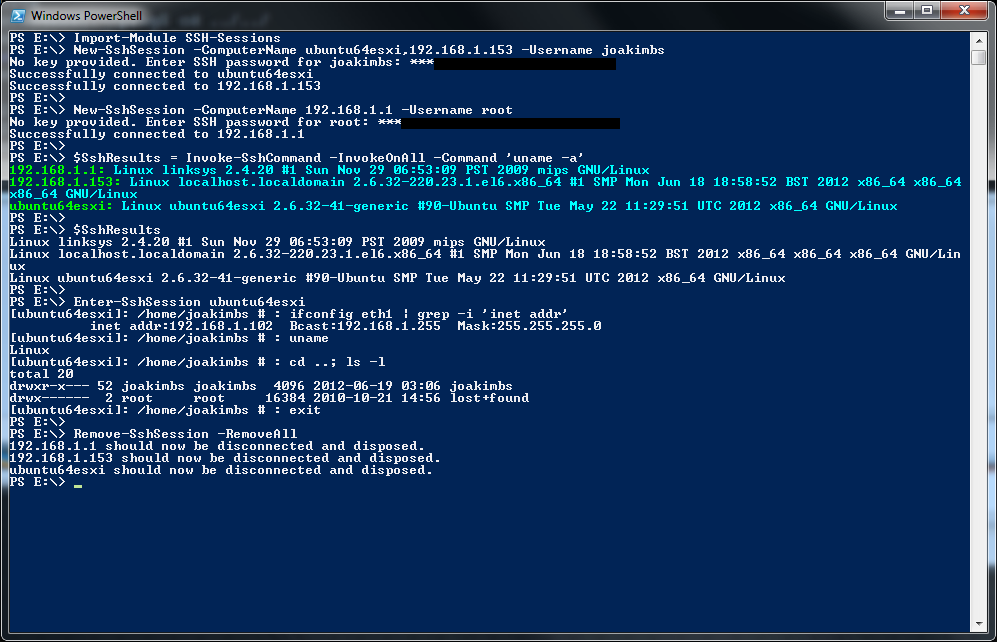 To list the cmdlets to get help for from the command line, use something like this, after you've loaded the module:

Here is an article that demonstrates how to parse "df" output from the Linux side to produce custom PS objects containing the data properly typed (numerical/string).

The first thing you do when you want to interact with hosts via SSH using this module, is to create SSH sessions to the target host or hosts.

The global $SshSessions variable will be populated with SSH client objects from the SSH.NET library (Renci), but you do not normally need to access this for basic use.

You can connect to multiple hosts at the same time using the same credentials, and to other hosts with other credentials by running the command again with different credentials. They will be added to the SSH client pool maintained in $SshSessions.

This lets you invoke/execute/run commands via SSH on remote hosts to which you are connected.

The output that shows the progress is colored and contains the remote host name. It can be suppressed with the parameter -Quiet, but then no progress will be shown. The results are always emitted to the pipeline so you need to assign the results to a variable. If you do not, and do not specify -Quiet, you will get the same output twice. I did it like this to be able to collect results while still showing progression.

You might find yourself wanting to do something not supported by the module. You can run a command like this:

Most of the technicalities are taken care of for you if you use the pre-made Invoke-SshCommand, but I figure it might be useful to know this. Before output is returned by Invoke-SshCommand, any trailing carriage returns and newlines are removed from the output before it's sent to the pipeline.

Get-SshSession lists all connections you've created with New-SshSession. They will be listed alphabetically. The function can be piped to Format-Table -AutoSize for a more condensed representation on the console (some other stuff too, but not in this case, I would think).

You can specify the optional parameter -ComputerName. If you specify a host for which there is no key in the hash, you will get back the string "NULL" as the value for the "Connected" column.

To store all the hosts, sorted alphabetically by Get-SshSession, in an array, do something like this (by the way, it's important not to use Format-Table in this one-liner...):

This enters an interactive session where the commands you issue are executed directly and output returned. Exit with the command "exit".

Disconnects and disposes SSH client objects and removes them from the global $SshSessions hashtable.

If you're looking for SCP/SFTP features for copying/uploading/downloading files, check this article. PowerShell version 2 is also supported.

As text for copying, etc.:

I've included the copies of Renci.SshNet.dll that I tested with in the zip archives below. If you want to download them directly from CodePlex and possibly get an updated version, go to the SSH.NET CodePlex page, click the download page and get the appropriate binary.

On 2016-11-05 I updated to the 2016.0.0 SSH.NET DLL, which has now moved to GitHub. You might want to ensure that you have the latest version by visiting the SSH.NET project page and checking the downloads. The module using the .NET 3.5 DLL expects it to have the name Renci.SshNet35.dll - and the .NET 4.0 version expects Renci.SshNet.dll. The .NET 4.0 version should work with PSv3, version 4 and 5. Doing my solemn duty and updating here.

If you have Windows Management Framework 5 or higher (WMF 5 is available for Windows 7 and up), you can install my SSHSessions module from the PowerShell gallery, a Microsoft site and online repository for scripts.

An attempt at a version history in the wiki (this is for the version in the PS gallery):

Adopting semantic versioning as of 2019-06-04. *''2018-02-20'': v2.1.1. Fix bug that caused calling scripts to terminate and raise a script-level exception when Get-SshSession had no sessions and also when Remove-SshSession -RemoveAll was called. Updated on GitHub and in the PowerShell gallery on 2018-02-18.
*''2018-01-01'': v2.1. Standardize to use Write-Verbose, Write-Warning and Write-Error. Quiet on success, without -Verbose. Another possibly breaking change if New-SshSession output is parsed, etc. Use an old module version if needed. v1.7.1 should be compatible with all "old meta scripts" you might find on the internet, plus the PSv2 version.
*''2018-01-01'': v2.0. Major, breaking changes. Return objects instead of strings and a boolean (true/false) "Error" property value.
*''2017-11-11'': v1.9. Add a handy -Reconnect parameter to New-SshSession. Possibly '''breaking''' change if you currently parse feedback/output: It's now standardized to Ansible style consistently.
*''2017-09-03'': v1.8. Ansible style on non-quiet output. Pipeline support almost everywhere (except where it would break stuff - that I could think of).
*''2017-08-17'': v1.7.1. Made it so you can omit -KeyPass, so it works with keys with no password (maybe sending in a blank one works too). Based on feedback.
*''2017-02-07'': v1.7. Corrected a bug where "PlainTextPassword" was hard-coded into the script instead of the variable $Password that was supposed to be there. Pushed version 1.7 to the gallery. This bug does not / did not exist in the version in the wiki (but that doesn't have the -Credential parameter or key password/credentials parameters).

Please let me know about obvious bugs in the module itself! svendsentech@gmail.com or use GitHub.

The PowerShell gallery version is now also on GitHub here.

Suppress the colored ansible-styled output from Invoke-SshCommand with the -Quiet switch parameter.

Screenshot of the same:

A Few Quick Tips About How To Use The Module

Download it, unblock the zip file (in the file properties or use Unblock-File is you have PS version 3 or later), then unzip and place the unzipped folder in one of your PowerShell modules folders. Modules require PowerShell version 2 or later. The DLL file requires .NET 3.5 or later. The PowerShell module folders should be listed in the variable '''$env:PSModulePath'''. This is from my environment:

If the folders do not exist, you need to create them. So to use this SSH-Sessions module, unzip the files into a folder called SSH-Sessions inside one of the module folders (Microsoft says "never put anything in the modules folder in C:\Windows, because it's ours", but... ;-). The full path in my case is '''C:\Users\joakim\Documents\WindowsPowerShell\Modules\SSH-Sessions''' (this is for my profile/user only).

Then you use the cmdlet ''Import-Module'' to load the module after it's copied to the proper path:

To load the module automatically when you start PowerShell, put this Import-Module command in your PowerShell profile (external Microsoft Technet site link).

From PowerShell version 3 and on, modules are auto-loaded when you type the name of a cmdlet/parameter in a module (I'm a bit impressed by this).

You can also use Import-Module on the (relative) path to the module, like so:

A Few Notes About Creating a Key for ESXi 5.x

I got a request for help connecting to ESXi 5.x, so I decided to document how to set up a public/private key pair using Windows and puttygen.exe.

*Download puttygen.exe, open it and click '''Generate''' to generate a private/public key pair. I set the number of key bits to 4096. 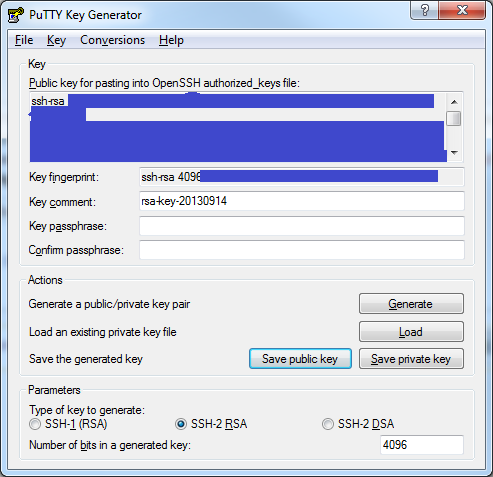 *Place the contents of the top field (the public key) in /etc/ssh/root-keys/authorized_keys on the ESXi target, for instance like this (see this VMware article for more information).

Then connect specifying the key you exported from puttygen.exe earlier: