In PowerShell there's a keyword called foreach that's used for looping over collections such as arrays (technically pipelines). The cmdlet ForEach-Object is used for processing objects coming in via the pipeline. These objects are found in the special variable "$_" inside the (process) script block you pass to ForEach-Object.

A bit confusingly (but conveniently), you can use both the shorthand (aliases) "%" and "foreach" instead of ForEach-Object in a pipeline. The logic behind that is as follows: If the word foreach is used at the beginning of a statement (or after a label), it's considered the foreach loop keyword, while if it's anywhere else, it'll be recognized as the ForEach-Object cmdlet/command. A cmdlet is a type of command.

As for the alias "%", this also doubles as the modulus operator, if used as a binary operator - one that takes an argument on both sides. Such as "10 % 1". I talk more extensively about this below.

For an article about the "regular" PowerShell for loop, click here.

This article was written about PowerShell version 2, which is the default in Windows 2008 R2 and Windows 7.

As I mentioned, the foreach loop is used to iterate, or loop over, collections. I will present a few examples here, as well as a diagram formally explaining the syntax.

The foreach loop enumerates/processes the entire collection/pipeline before starting to process the block (statement list / code), unlike the pipeline-optimized Foreach-Object cmdlet which processes one object at a time.

You can not specify a type for the variable in a foreach loop. The error you will get if you try is:

The syntax of the foreach loop is described in the following diagram:

This loop just gets the numbers from 1 to 3, specified as a comma-separated list, and emits them to the pipeline. In this case it's printed to the console. I also demonstrate that the last value the variable has - the last element in the pipeline - is available after the loop.

You can also assign the results to an array, like this:

I should mention that if PowerShell sees a "%" in the middle of a pipeline, it will interpret it as the ForEach-Object cmdlet. "%" is only the modulus operator when it's used as a binary operator. A binary operator means it has an argument on both its left and right side, while a unary operator usually only has something on its right-hand side, and always only one argument in that latter unary case.

The range operator ".." (two periods) enumerates ranges of integers between the start and end integer specified. If you specify a decimal number, it will be cast to the [int] type. PowerShell uses what is called "banker's rounding" and rounds N.5 numbers to the closest even integer, so 1.5 is rounded to 2 and 2.5 is also rounded to 2.

A way that I personally find a bit easier to understand for this specific case, is using "-eq 0":

Example With A Pipeline

In the diagram above, it says you can have a pipeline, so let's test it. Here the pipeline is "dir -Path e:\temp | Where { -not $_.PSIsContainer }". This uses the Where-Object cmdlet, which filters out all elements where the last statement/expression within the block returns false, and only passes on the ones that evaluate to a true value. In this example, it filters out directories and only lets through files (non-directories). Read more about the Where-Object cmdlet here.

Let's look at the sum.

There's a built-in constant for "MB" which allows you to do this to easily determine the size is about 346 MB:

With PowerShell version 4 came "LINQ" support. My knowledge about this is superficial. I will demonstrate ".where()" and ".foreach()" on arrays.

Let's dive right in with some examples.

I will also show that it works without the parentheses, a not-very-known fact.

This is quirky and definitely not best practices. If you add a space, like you can with ForEach-Object, it will produce a syntax error.

Of course, you can also specify a variable such as an array in place of the "pipeline".

The continue And break Keywords

To skip processing of the remainder of the block and move on to the next iteration in the loop, you can use the keyword continue. If you use the keyword break, you will break out of the (innermost) loop entirely (unless you specify a label).

And here's an example of break:

If you have nested loops that aren't labelled, continue and break will act on the innermost block. As demonstrated here:

Here I demonstrate the special $foreach variable that exists within a foreach loop, and it has a .MoveNext() method (that emits output you probably want to suppress by piping to Out-Null, assigning to the $null variable or casting it to the [void] type accelerator).

This will give you odd numbers between 1 and 10:

Another use you might have for it, is if you have an array, and need to get the next item after some condition is met. It can save you from setting flags, although it's about as clunky. Here's an example where I want the first letter after I've matched "c" (so I get "d").

To suppress the unwanted boolean output from $foreach.MoveNext(), you can also cast the results to the void type accelerator:

I'll toss in a real-world example where you have an array of values where every other element can be used as a key and a value in a hashtable:

To add this to a hash, you can use something like this:

That was meant to be explicit. In the real world you would probably rather write something like this:

Side note: In Perl you can simply assign an array or list to a hash and this is done automatically - with a warning if there's an odd number of elements in the list/array. The Perl code would simply be: my %hash = @array;

Here's an example of some code where the outermost loop is labelled with the ":OUTER " part before the foreach keyword, indicating the name of the label (OUTER). When you use the continue or break keywords, you pass this label name as the first argument, to indicate the block to break out of (if no argument is passed, the innermost block is targeted).

The ForEach-Object cmdlet, which can also be written as "%" or "foreach", is basically a type of foreach loop designed to work in a pipeline. After the command name or alias you choose (among the three mentioned), you specify a script block, denoted by a start and end curly bracket, in which you place code that's run once for each object coming in via the pipeline. It's much like the map keyword in Perl, only left to right, not right to left (which suits me, given my less-than-fluent Arab reading abilities).

Inside the block with the code/statements, the current object in the pipeline is accessible in a so-called automatic variable called "$_". So, to access the "Name" property of an object inside the ForEach-Object script block, you would use "$_.Name" (or "$_ | Select -ExpandProperty Name").

The syntax is as follows:

It can also take a begin and end block:

Pipeline Objects Are Generated And Processed One At A Time

An important difference between foreach as a keyword (looping construct) and the command/cmdlet ForEach-Object, is that the keyword/loop generates the entire collection specified in the pipeline before processing it. Foreach-Object on the other hand gets one object from the pipeline, processes it and passes it on, so it operates on one object at a time. This should give reduced memory usage in some cases.

To span multiple lines, you can use it just like the regular foreach loop, since it takes a script block where you can put any valid PowerShell code. You can also separate statements with semicolons, that act as newlines, for shorter/simpler stuff. 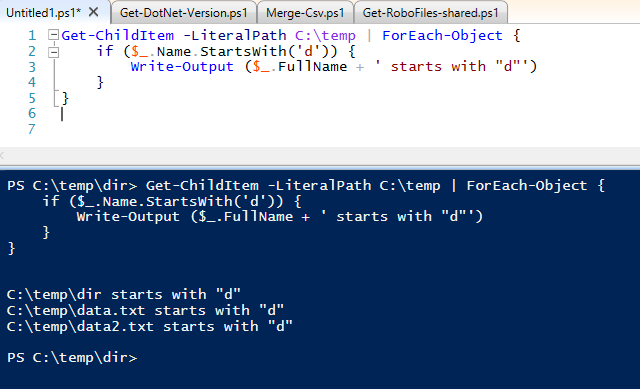 Another feature of ForEach-Object is that it can take multiple script blocks. If you specify two script blocks, the first will be treated as the so-called begin block, while the second is the process block that's run once for each pipeline object. If you specify three, it's the same, and the third is the end block. There's more about this in the examples. There's some clunky logic here where the ForEach-Object technically gets multiple process blocks and deems one of them the begin block if there are two blocks, and no explicit -Begin parameter has been specified.

The begin block is executed before pipeline object processing begins, then the objects from the pipeline are processed one at a time in the process block, and finally the end block is run after all objects have been processed.

If you specify a ForEach-Object -Begin { } -End { } and then add more script blocks, they will be treated as multiple process blocks.

I should probably also mention that nested arrays will be "flattened" when passed through Foreach-Object. I won't go into much detail on this, but you can work around it by prepending the unary comma operator before the automatic variable, like this:

That would preserve the nesting. The process of flattening the array is referred to as "unraveling" and that it does this was a design choice by the PowerShell development team. Most of the time it's what you want when working at the command line.

Examples of how this preserves nesting:

Here I create a collection of numbers and just emit them to the pipeline in the ForEach-Object.

To store them in a variable for later use after the processing, just assign to a variable at the start of the line, like this:

Here I list files starting with "test.". Of course, specifying a filter to dir (which is an alias for Get-ChildItem) would be better in this case, but it's for the sake of demonstration - and we get pretty colors! This specific example is also really more suited for the the Where-Object cmdlet.

There you can see that I initialize $Sum to 0 in the begin block in the second ForEach-Object example.

With An End Block As Well

Now, if you want to do something after all the objects in the pipeline have been processed, you can put it in the end block. Here's the same example as above including an end block.

Hacking The continue Keyword In A ForEach-Object

Since ForEach-Object uses a script block, you can't break out of it with the continue keyword that's used for foreach and for loops. You can use the return statement instead to achieve a similar result. If you do use the continue keyword, it will act like the break keyword in a foreach, while or for loop. If you do use break in a ForEach-Object, it will act the same as continue. Note that the end block will also be skipped this way, if present.

And with continue we see that it stops processing the remainder of the pipeline: