With PowerShell 2.0 came multi-line comments. They start with "<#" and end with "#>". They can be placed anywhere (except inside strings, but that's sort of a given), and anything between them will be treated as a comment. PowerShell 2.0 comes built-in with Windows 7 and Server 2008 R2. In Windows 10, you have Windows PowerShell 5.1 and optionally PowerShell Core. 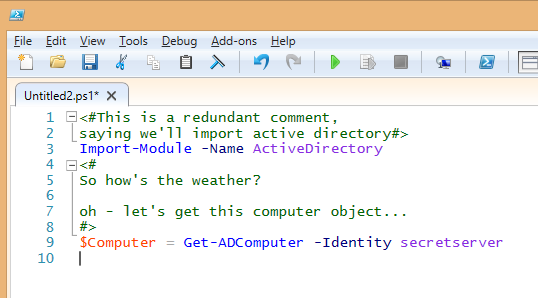 To get a multi-line comment in PowerShell version 1, you can "hackishly" use so-called "here strings" to "comment out" multiple lines / a block of code. You do this simply by enclosing the code snippet in either "@' contents '@" or "@" contents "@", where the latter will interpolate/expand/substitute variables. Then you pipe it to Out-Null to suppress output. See the examples below.

Be aware that you need to put the closing delimiter ('@ or "@) on its own line and at the start of the line. Also be aware that the safest choice is single quotes.

Single-line comments start with a hash sign: "'''#'''". They can be placed almost anywhere (of course not inside strings) and will make the rest of the line a comment.