You could find yourself wanting to know which versions of .NET are installed on remote computers or the computer you're on. Here is a PowerShell script that takes a list of computers (or you can use -LocalHost for the current computer), collects data via remote registry access - or PSRemoting as of v2.0 - and the original script creates a CSV file with the data. To be friendly to people used to the old script, I added the parameter -ExportToCSV to the "DotNetVersionLister" module I've since then uploaded. It's a lot more standards-conforming as PowerShell goes. It emits/outputs objects instead of simply writing a CSV file by default, plus I added support for using PSRemoting instead of remote registry access, with the -PSRemoting parameter.

I'm not rewriting all of the documentation, so some of it could be partially outdated if you use the latest v2.x module - but I do recommend that.

... and greater, but then it will just say "4.8 or later". Drop me a mail at svendsentech@gmail.com if a new .NET version is out. I'll try to add support if possible. This is now also on GitHub (see the download section below).

The CSV has one field for errors, one for each .NET version from 1.1 till 4.0 (client/full differentiated for v4) and one field with the computer/host name. In v1.1 and later versions of the script there's also a field for 4.x which differentiates between the different 4.x versions above 4.0, from 4.5 and up.

I didn't add detection of .NET v1.0, so you're on your own if you need to look for that. You will also have to rewrite the script if you need to detect service pack levels.

I initially wrote a simple version of this script some time ago, and I've now rewritten it to suit "public" standards a bit more, and it has then been patched with detection of new versions. As the years have passed since inception in 2011, this script has by now been patched numerous times, and rewritten almost completely. The documentation is partially outdated in this article.

Here's what the latest version looks like with the -LocalHost parameter in use: 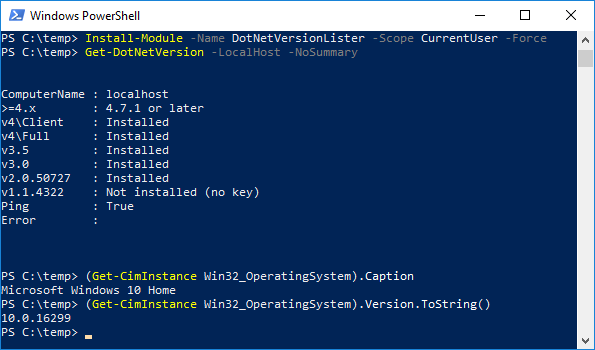 In the table below you can see the registry keys that are used. If the value is "1", the script reports them as installed. There's an article from Microsoft about this here (previous link: here.)

Here's a screenshot of the CSV imported to Excel.

In Excel 2010 the default delimiter appears to be a tab, not a comma, so you need to go to the ribbon "Data", choose "From Text" under "Get External Data" and specify the correct options when importing. Using either the default encoding ANSI or UTF-8 works for me with the lab data. You need to specify that the data is delimited, and that the delimiter is a comma.

There's more about this in the Excel help if you search for "excel import csv" or similar. A trick to avoid this, is to use a semicolon as a delimiter in the CSV file, and save it with a .csv extension. That should cause Excel to magically import it correctly when double-clicked (yes, I boldly split infinitives!). Note made 2021-10-13 when preparing a migration, semi-automated, of the wiki to a new web server, and abandoning MediaWiki for display: It turns out this depends on your locale settings. With a Norwegian computer, a semicolon works automatically in Excel, while with English as the language, a comma does. You will have to test (or know) for your culture/language.

I've learned this depends on culture settings, so instead of -Delimiter ";" # you can use the parameter -UseCulture, this should make it open magically in Excel on ''that'' computer with current culture/locale settings.

Parameters for the original script.

Here are the results from the home lab. The -ComputerName parameter takes a list of strings; to use a file, use "(gc .\computers.txt)". In the screenshot example I use a subexpression with a pipeline that just gets every computer from Active Directory. See this article for information about how to get computer names from Active Directory.

Some errors and some successful checks.

Looking At The CSV Data

To filter out and inspect all errors, you can do it like this:

To filter on which computers have .NET 4.0 Full installed, you can do it like this:

You can use "$_.'v4\Full' -ne 'Installed'" to see which clients or servers don't have it installed.

I started the remote registry service on the Vista client and now I got the data from that too:

Here's a screenshot of a summary of my test environment:

Here's how the 4.x versions are differentiated:

Here's a screenshot of the DotNetVersionLister module (v2.0 of this thing, you could say):

*Get-DotNet-Version.ps1.txt - frozen, old, obsolete version for now - do not use, v1.x. Right-click, "save as" and rename to .ps1. Remember to unblock (PSv3 and up have the cmdlet Unblock-File). *DotNetVersionLister.zip - v.2.2.5. Download, unblock, unzip, copy to a modules folder. Or download it from the PowerShell gallery (see below) or GitHub.

It's on GitHub here: https://github.com/EliteLoser/DotNetVersionLister

If you have Windows Management Framework 5 or higher (WMF 5 is available for Windows 7 and up), you can install my DotNetVersionLister module from the PowerShell gallery, a Microsoft project and online repository for scripts.

To install with WMF 5 and up (to get the latest DotNetVersionLister module version available), simply run this command (requires an internet connection):

Or for your user only (does not require elevation / administrator privileges):

Get the latest .NET version

"Random" (non-asynchronous) code for getting the latest .NET version in a fairly reliable way using the DotNetVersionLister module.

I got an inquiry from Anton Ostrovsky, and he had been nice enough to document how to start the remote registry service via sc.exe, by adding a few lines to my script. I took his idea, but feel like this is a separate task entirely, so I put it here in a couple of simple, "throw-away", example scripts at the bottom of the article.

To enable the remote registry service, and set the startup type to automatic, you would ideally use an AD Group Policy (GPO/GP), but if you ghetto it (temporarily), you can use a simple foreach loop that iterates a list of computers, checks the status of the service with Get-Service, and if it's not running, it tries to set the startup type to automatic and then to start it (it seems to get a start signal immediately when you set it to auto).

The scripts were written to be compatible with PowerShell version 2 and up.

The results will look like this for disabling and enabling:

Enable-RemoteRegistryService.ps1.txt code. Read it, understand it, and adapt as you see fit, or just run it (you will need to populate the $ComputerName variable).

If the service is already running, it'll look like this:

Here's a similar, but reversed script, for disabling the RemoteRegistry service, if you want to do that after enabling it and then processing the computers with Get-DotNet-Version.ps1: Disable-RemoteRegistryService.ps1.txt.